CLEARANCE AUCTION - everything MUST go! A former teacher who struggled to work due to illness is now successfully running her own business making handcrafted personalised rag dolls – after receiving financial support from The Sir Thomas White Loan Charity.

Ruth Lord and her husband Andrew now run Dress-A-Doll, the only rag doll company that makes a doll with a full head of hair that can be styled on the open market.

Describing how her business came to be, Ruth explained how a difficult time in her life and her former job as a teacher pushed her to start her company.

She said: “Illness started the adventure, followed by two small children. I wanted to work from home doing something I loved. 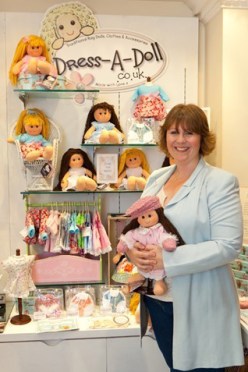 “They have been so encouraging when we see them, even though we haven’t followed our original plan, they have seen the growth we have made and believe in us,” said Ruth of the Charity’s Trustees.

“You need people like that to say ‘we believe in you’ and it’s nice to get their business knowledge and perspective.

“It’s great that the charity believed in us, and that encourages you to know you have something worth investing your time energy and money into.”

In 2013 Dress-A-Doll won the silver Independent Toy Award in the Toy Shop UK awards and the business is hoping to build upon its success by opening a small factory in the near future.

Ruth’s inspiring story shows that regardless of what obstacles get in your way, following a passion can help you deal with them.

When asked what advice she’d give anyone thinking of starting their own business Ruth said: “Get a mentor – someone who you look up to. Do research on your competitors – know your market inside out before you even start. Ask lots of questions and join a support network of likeminded people.”

Thinking of applying for one of Sir Thomas White loans? CLICK HERE for more information.